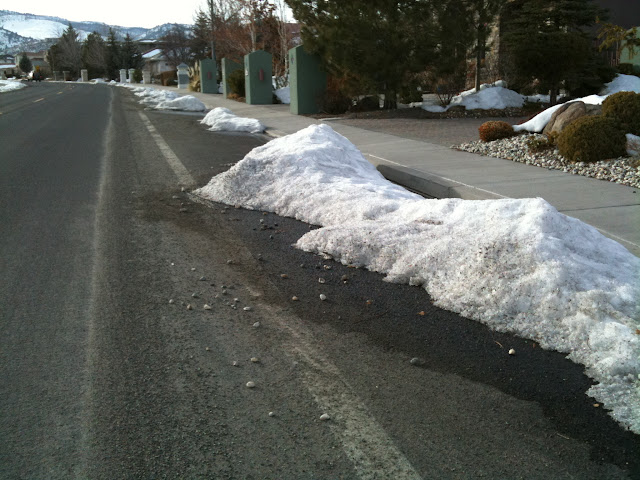 Five weeks and the snow is still piled up everywhere. If you live in Minnesota, this may sound like a wimpy complaint but for Reno, it’s a long time. And the bicycling in Reno is somewhere between dangerous and impossible, assuming of course that you don’t mind cycling in 6 layers of clothing.

Last year I gave a lunch time talk to a chapter of the American Public Works Association. One of the questions was, “Why don’t bicyclists stay in their bike lanes?” At the time I answered with the Nevada statutes which makes it illegal for a motorist to drive in the bike lane but does not restrict bicyclists to the bike lane. And then I followed with bicyclist having to avoid sand, broken glass and other debris in the bike lane to avoid a fall or flat time. I failed to mention snow.

Of course, the safest place to ride a road bike on the road is in a bike lane. In a 1998 study for the Transportation Research Board, William Moritz of the University of Michigan compared the safety of different bicycling facilities and found:

So when the snow piles melt and the street sweeper has swept, stay in those bike lanes and off of the sidewalk. Don’t become a statistic yourself. In the meantime, take care and good luck!