Success! But is it temporary? 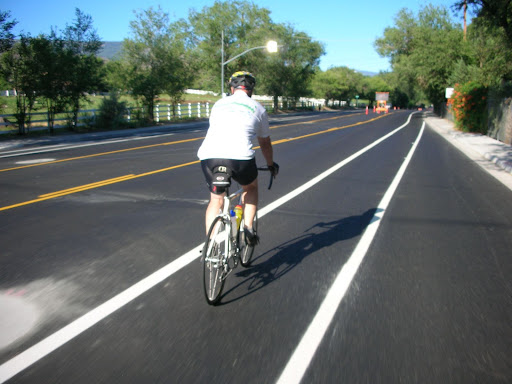 Bicyclists can’t help but be pleased with themselves, the City of Reno and the RTC when they cruise in the new bike lanes on Mayberry Drive. Not only are there bike lanes but the road is very smooth and the automobiles are confined to one lane each direction and a center turn lane, causing cars to naturally slow down to the speed limit. This feels good for bicyclists, good for pedestrians and good for the residents along Mayberry who reportedly have complained about motorists speeding.

But is this a temporary success?
The striping on Mayberry along the Edgewater subdivision was done with a temporary paint that, I’m told, should last for “2 or 3 months”. This temporary paint job is to allow the residents of Edgewater, who opposed the “road diet” for Mayberry, to test out the new design and also to see how the new design effects the delivery and pickup of students at Roy Gomm Elementary School. The RTC engineers are confident that this design will work better for both the Edgewater residents and the Roy Gomm parents.
Let’s hope that both groups will approach the evaluation of this design with patience and an open mind.