Bikes get the valet treatment in downtown Reno this summer with the Nevada Bike Coalition and Reno Bike Project “Bike Valet” at Rollin’ on the River every Friday at Wingfield Park.

We’ll have a safe, convenient and FREE bike corral in West Street Plaza Fridays from 5-8pm, June 13th through August staffed by friendly and vigilant volunteers. And by volunteers I mean bonafide local celebrities and cyclists just like you, like City Councilman David Aiazzi, Assemblyman David Bobzien and others looking out for your trusty Trek and talking to people about cycling issues in Reno. We’ll have a different influential celebrity each week so check back to find out who you’ll want to come meet next.

So no more driving around the blocks of one way streets looking for a place to parallel park. And don’t worry about buying popcorn at the theater just to get your parking validated, either. The last time I parked in the alley off 1st st. a guy with a blanket over his shoulder and missing one shoe offered to park my car for me. That was nice. But not this summer. This summer friendly valet attendants will park your bike inside a barricaded corral and retrieve it for you when the concert is over.

Directly across the river from Wingfield Park, our Bike Valet in West Street Plaza couldn’t be more convenient. A fantastic opportunity to save a few bucks on gas and meet some great people.

If you’re worried about your commute back to the south meadows area after the beer and sun goes down, consider parking someplace a little closer with your bike in the car and riding from there. You’ll still be saving gas, reducing congestion, and LOOKING AWESOME, but won’t have to commit to 20+ miles at the end of a long week. Any ideas of good places to park in close proximity to downtown? Leave a comment and get the wheels a rollin’! See you there! 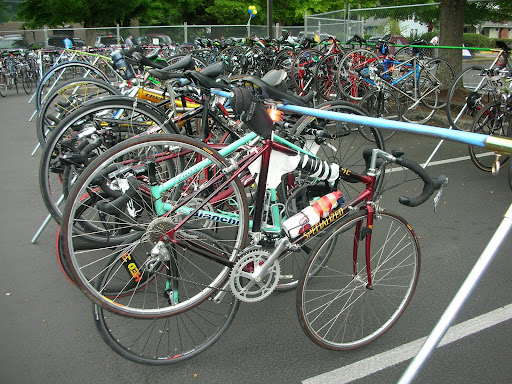