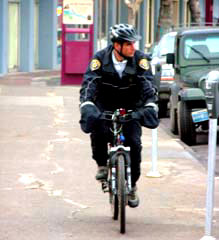 Are Bicyclists getting a fair shake from the police? Darren Seltzer thinks maybe not.

Hello All. This email is merely a rant, there is no ‘timely’/critical information, so you can delete now, or read on if you would like to know more. I was watching the morning news (rare that I am up that early) and saw a clip on an elderly lady who hit a cyclist yesterday. The footage showed the horrifically cracked windshield of the red, 2 door, late model Cadillac (shocking huh?). The cyclist was said to have a few major injuries, and that he was wearing a helmet. The only other information I know is the lady was cited for a “failure to yield” violation. If you are still reading…I had read on Velonews of a forum (link below) by an attorney, who thought there is a huge bias against cyclists in both the driving/police enforcement communities. Mr. Mionske quotes many incidents (including one in Incline not too long ago) where many cyclists have been hit/and or killed, and then to find the driver rarely cited, even when the situation dictates pure driver error. You can read the link below: http://www.velonews.com/news/fea/13637.0.html Finally to my question: For the Reno cycling community, has anyone personally felt/seen a bias against cyclists? I would also like to ask anyone with any legal background, how/why do these motorists only receive a slap on the wrist for injuring or even worse, killing a cyclist? Thank you if you have read this far. I believe we all know as cyclists there are inherent risks in our sport, but there should be greater consequences for motorists who injure/kill cyclists, just as a motorist to motorist fatality (vehicular manslaughter). I apologize if I seem a bit heated. It’s just that these incidents arise quite frequently, more than they should. Thanks again everyone! PS-if anyone has any information on the cyclist I heard of this morning, please let me know.